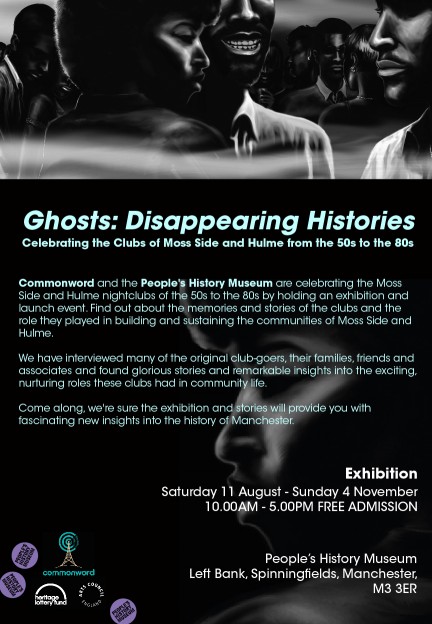 Ghosts : Disappearing Histories
Celebrating the Clubs of Moss Side and Hulme from the 50s to the 80s

Commonword and The People’s History Museum are celebrating the Moss Side and Hulme nightclubs of the 50s to the 80s by holding an exhibition and launch event. Find out about the memories and stories of the clubs and the role they played in building and sustaining the communities of Moss Side and Hulme.

We have interviewed many of the original club-goers, their families, friends and associates and found glorious stories and remarkable insights into the exciting, nurturing roles these clubs had in community life.

Come along, we’re sure the exhibition and stories will provide you with fascinating new insights into the history of Manchester. 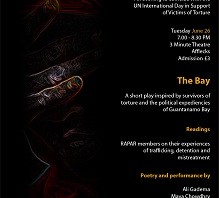 Fade
If I say to you what is a human right…

RAPAR members on their experiences of trafficking, detention and mistreatment
www.rapar.org.uk

Poetry and performance by

To book a space on the open mic email martin@cultureword.org.uk

It is hard to overemphasise the centrality of reading to writers. Linda Anderson, Professor of Modern English and American Literature at Newcastle University, contends that “Reading is one of the chief ways to train yourself as a writer.” As if to emphasise this point, every now and again we see writers’ summer reading lists in the papers, suggesting a very committed undertaking by those surveyed. Still, some critics scoff that with the writing published these days, an appreciable number of writers are not reading enough. This may hold currency with people just setting out to write – where the notion that reading messes with one’s writing is not uncommon, particularly amongst writers with a false sense of the purity of their own writing – but ignores the fact that all experienced writers read: it is silly not to. It is true some writers may not read fiction/poetry while they are working on a particular text, but this is hardly a position that excludes reading per se, only particular kinds of reading at particular times. The problem therefore is not the absence of reading: the problem is what writers read while they write and how they read it.

Starting with what to read, normally the advice is to identify writers whose style is similar to your own and who are writing in the same field, especially those that have recently been published. The received wisdom is that you have to check out the competition – what subjects they are tackling and how they handle them – so that you can avoid duplication. And just as importantly, are there any gaps in the field that you can slot your writing in to, to give it an edge? There is also the matter of style and structure, again paying attention to what has come out recently, in order to help fashion your own unique style.

Looking at how to read, practitioners advise writers to read form rather than content: reading how the piece works rather than what it means. Writing to novelists Sarah Harris said, “When we read other fictional works, as writer, we read them de facto instruction manual for technique, style, structure and thematic possibility.

While this ‘common sense’ approach undoubtedly has merit it has an unfortunate side effect: publishing, like the fashion industry, is dominated by trends. And these trends are often reinforced by reading. What excites publishers, and what it is in their interests for us as writers to read, drives the industry. It should come as no surprise then that anyone operating outside these self appointed judgements, for that is what they are, is likely to struggle to find interest. Once, while I was searching for agents, two agents, who had rejected my novel, told me that for ‘ethnic’ writing publishers were looking for hybrid subjects – stories that straddle both the ‘exoticism’ of the Third World and the familiar milieu of the Western metropolis. In other words I should be reading and writing books like Brick Lane, The Icarus Girl and The Kite Runner.

Leaving aside the extent to which this holds the literary imagination hostage, I am wary of trends for the simple reason that they are fickle and they date your writing, giving it a short shelf-life. This is not always a problem. For genre writing, where short shelf-lives are often the norm and there is a large, multi-niched audience, trends can be challenging and exciting, stimulating new conversations and (for the genre) ideas. But even here, as trends become exhausted a waiting game develops. It is a brave writer that in the current climate writes a book about wizards and vampires, but as to what replaces them the new trend has not yet come fully into view.

This presents a serious obstacle for much literary and less genre specific fiction, particularly for texts that have long gestation periods and few prefabricated reference points. Even themes and concerns that appear to have been around for long periods run out of steam. I have a feeling that immigration and its attendant motifs of cosmopolitanism, identity crises, nomadism etc, is getting tired; in part a result of the lingering economic depression and the weariness with immigration into the west at a time of austerity. I am working (on and off) on a collection of short stories on immigration which, I fear, by the time I finish them might be out of fashion. My best shot is to send them ‘home’ to Uganda for publication: immigration is still romanticised in Africa. The question then becomes: how will they be received? The answer to this is not straightforward, but as a writer contemplating publishing ‘back home’ it pays to know what back home is currently interested in. Which means reading again, this time based on local writing, but with the same concerns outlined above: what topics and themes are being published and how are they being handled? There is also a similar but ironically reversed concern for language use.

As an example of what this may mean, I am beginning to sense that empire bashing, for postcolonial writing, is starting to fatigue readerships, especially in the Third World where masses are living under tyrannical regimes. My father’s generation, which sang the “song of fire…at the colonial dusk” (from Yet Another Song, David Rubadiri) and then watched as their dreams went up in flames, have no patience with postcolonial sentiments. Their view is, if our own people are brutal to us now, how can we blame European colonisers of long ago? Western readers too are getting bold, asking: “Are you saying nothing good came out of colonisation?” It is a tentative question but a pertinent one. For a World Literature writer (the preferred term these days – postcolonial is both exclusive and fixes relationships strictly in European terms) an awareness of these shifts in the cultural-political interests of your potential readership is a necessity, as prevalent ideas and understandings are rethought.

Many novels about Africa and Asia written in the West travel back to the worlds they depict and are rejected by local readerships because they are seen as distorted representations. The problem is that immigrant writers keep the picture of home as they left it so many years ago. But culture is like a river, it flows constantly. (Ngugi wa Thiongo) Your home country is no longer what it was when you left. It is called cultural currency. I have nothing to say to writers who write about real places or cultures they have never visited. But I know one thing; there is no wrath like a people misrepresented. Where, as a writer, you must be careful is to not stifle your own innovation and learning by becoming caught in the either/or of two worlds: back home and here. To not misrepresent does not mean to slavishly copy the styles and structures of the writing being produced in the society you address. World literature is a conversation, an opening and widening of possibilities. A learning experience.

I am working on a novel set in Africa dealing with inheritance of sin and perpetuation of curse. I read recently published African novels and novels set in the Third World. Recently, I picked up Kate Mosse’s Labyrinth, where she handles historicity and reincarnation, to see how she structures the past against the present. I learnt that when dealing with history, short chapters work best. Readers hate a barrage of historical facts. I noticed this when I read Nadifa Mohammed’s Black Mamba Boy: her long paragraphs and protracted chapters made the novel seem mountainous. Consequently, I restructured my novel. As a result, shorter chapters look and read better. Also, Mosse’s simplicity of language taught me that when dealing with a complex subject, it is best to make language as accessible as possible. Despite the distance between Mosse’s French world and my African one, reading her Labyrinth enhanced my writing.

Commonword and Zion Arts Centre are celebrating the Moss Side and Hulme night clubs of the 50’s to the 80’s by holding an exhibition and evening event. Find out about the memories and stories of the clubs and the role they played in building and sustaining the communities of Moss Side and Hulme.

We have interviewed many of the original club-goers, their families, friends and associates and found glorious stories and remarkable insights into the exciting, nurturing roles these clubs had in community life.

Come along, we’re sure there will be people you recognise or stories that will tug your memories and inspire you to a greater love of this history.