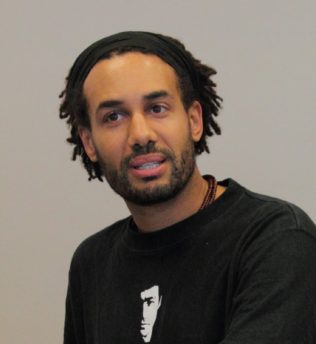 His dramatic performances employ a fusion of techniques varying from reggae-rhythms to hip-hop flow to stand up comedy, displaying an “insight that is irresistibly politicising and humanising with humour, angry-yet-calm honesty, linguistic punch, tenderness, and barefaced cheek” (Red Pepper magazine). He has performed his ‘seriously playful and playfully serious’ poetry on stages throughout the UK, across the US, Afrika and in the Caribbean for over a decade appearing at international festivals including: Busboys & Poets (Washington DC), Brave New Voices (San Francisco), Shake the Dust (Southbank, London), UpRise (UK). He has been a finalist in several slam competitions including: Mo Juice (Barbados), Ilkley Literature Festival, Superheroes of Slam.