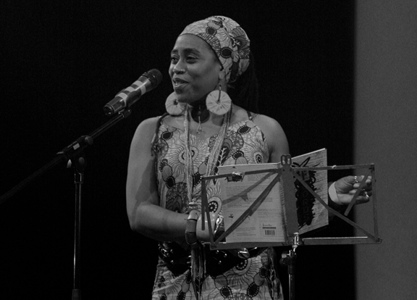 Khadijah Ibrahiim was born in Leeds of Jamaican parentage. Hailed as one of Yorkshire’s most prolific poets by BBC Radio, she has appeared alongside the likes of Linton Kwesi Johnson, Lemn Sissay and Benjamin Zephaniah.

She is a literary activist, researcher, educator and Artistic director of Leeds Young Authors. Educated at the University of Leeds, she has a BA Honours in Arabic and Middle Eastern studies and a MA in Theatre Studies. In 2013 she was amongst several poets invited to Buckingham palace, where the Queen and Duke honoured the work of Contemporary British poetry. Her writing has been supported through Inscribe.