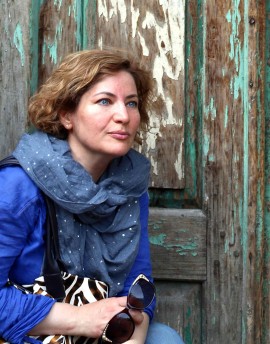 Tell me about you, as a writer

I have always been interested in writing, but the events in my life guided me towards a different path. When I started to work on my PhD thesis, I realised that I was meant to write. All that remained was to resign from my two part-time jobs, as a teaching assistant at the University and as a pharmacist.

I write in Persian (my native language) and in English. When I write, I become a more improved version of myself. I push myself to be more open minded and see the world through other people’s eyes, experience familiar things in new ways. I guess as a writer I am a more adventurous, quieter person who sees and listens more and judges less.

Your recently performed in Standing In My Own Truth, which was on at Z-Arts, Manchester and Arnolfini Theatre, Bristol. How did you find?

It was surreal. I don’t see myself as an actor, but when the opportunity came to be involved in the process of writing and acting through CAN, I couldn’t refuse. In a way standing on the stage looking at the dark outlines of audience made me more aware of the audience for whom I write, you don’t often see them but know that they are there. Additionally, in the play, the subject of immigration was addressed, not from the much debated economic or cultural angles, but approached as the experiences that migrants go through. I am honoured to have been part of the project.

Back in March, you performed on International Women’s Day with Women in the Spotlight and you also attended an Arvon writing course as part of the WITS programme. How did it feel to perform your work to the audience? What do you feel you gained from attending the Arvon course?

I see performing your own words not as acting but as an extension of writing and in that way I enjoyed every minute of my performance. It was also great to see other performances.

I have not been trained academically as a writer, so any opportunity to learn about the dos and don’ts of successful writing for specific audiences is bound to be useful. In addition, the tutors chosen for the Arvon course were fantastic. Our activities were mostly focused on writin0,g but I also enjoyed the valuable experience of working and living alongside other women in the group. All the experiences helped me to think more about the structure of writing which helps put my writing in specific frameworks. I cherish my time spent at Arvon.

Commonword published your book, Bazgasht (Homecoming) back in 2015. What have you been working on since then?

I am currently doing the final (hopefully) editing of my first novel in English, with the working title of ‘The age of deceiving’.

What advice would you give to someone starting out in creative writing, who writes in multiple languages?

I don’t know about advice but sometimes you have to choose in which language you want to write. Being able to write better in a specific language isn’t always the deciding factor. Accessibility is also important. For short pieces of work and when practical I enjoy writing in both Persian and English without direct translation as in each language the general interest, assumptions and defaults can be different and as the author of the work  I give myself the authority to manoeuvre to accommodate culture-specific concepts.

I tend to write on my main weblog Sharp-pencils.

Bazgasht is in Persian and is available here.

I am focusing on publication of my novel and a collection of short stories which I have already written, so watch the space