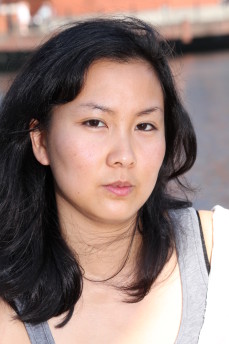 Tell me about you, as a writer

I enjoyed writing poems and stories at school then didn’t write anything for years apart from business plans and funding applications at work. In 2013 I went to a few writing workshops led by playwright Billy Cowan and wrote a short play called HIGH FORCE which was one of  the three winners of the First Break writing competition at Oldham Coliseum and went on to be performed at Hebden Bridge Arts Festival. This encouraged me to keep going and through the support of the Write for the Stage course at Studio Salford, I wrote my next play PASS which was selected for the 24:7 Theatre Festival in 2014. This gave me the confidence to call myself a writer and a playwright.

After attending an Arvon residential with Commonword’s Women in the Spotlight group, I started writing poetry again. I enjoy writing about identity, faith and the ethical dilemmas present in 21st century Britain.

You toured your play One Flesh back in March. What inspired you to write it? How did you find the touring process?

Several things inspired me to write ONE FLESH. I am an Evangelical Christian (but NOT in a Donald Trump way – I’m probably one of the more liberal members of my church) and have first-hand experience of an “Ex-gay ministry” also known as reparative therapy where people are “counselled” and prayed out of their  homosexual “tendencies.”

In the summer of 2014, well known Christian musician, Vicky Beeching, came out as a lesbian and I followed the Church’s and the media’s response with interest.  While predictable I was still fascinated to see how her announcement divided the church with some being very supportive while others called her “an abomination “ and  bound for hell. Yet Vicky Beeching is in a privileged position of being a Christian celebrity, white,  conventionally attractive, middle class , Oxford educated and a journalist able to articulate herself in the spoken and written word. It made me wonder what it would be like if you were just a “normal” person in church struggling with your sexuality. Unfortunately I did not have to wait long to find out as later that year Manchester teenager, Lizzie Lowe, took her own life due to fears about revealing her sexuality to her family and friends. This had a particular impact on me as I used to attend the same church as her and her family so her story felt particularly close to home. What struck me was a newspaper article where her parents said that they would have accepted her and her being gay would not have changed the love they had for their daughter but these feelings were never said or expressed. I wrote ONE FLESH for Christians, for the Evangelical church in particular, because I want them to at least talk about homosexuality and examine their views on marriage and sexuality.

The touring process was interesting as our audience varied widely at different venues. At our first performance over 50% of the audience were LGBT young people, at the final one our audience were mostly Quakers aged 50+ yet feedback shows that the play was relevant and spoke directly to both groups. Other audiences were an interesting mix of people with no faith to elders of Evangelical Churches and I was really pleased the play drew people together in this way and that in post-show discussions, people shared their views respectfully. It made the stress of touring which included quick get ins and get outs, lots of heavy lifting and solving logistical problems worthwhile

Are you working on anything new that we’ll hopefully be able to see soon?

I have a couple of things in development. One is a biographical one-woman show called MY LIFE AS A BANANA that will hopefully have a work in progress sharing at the end of September at the Kings Arms Salford as part of Studio Salford Development Week. It’s a fun show with snacks, audience tasks plus the opportunity to give feedback. You should come!

I am also in the very early stages of planning a verbatim theatre project working with adoptive families, particularly adopted children to explore the ways they feel similar to their adoptive family and how and when they feel different. Adoptees will be asked how much they think nature (biological factors) and nurture (their home, school, community environment) has influenced their identity and personality. Hopefully this project will receive Arts Council funding for a Research and Development period leading to a scratch performance in February 2017.

Back in March, you attended an Arvon writing course as part of the WITS programme. What do you feel you gained from attending the Arvon course?

It was fantastic to have a week away to focus just on writing even it meant there was NO INTERNET.  I discovered the joy of writing poetry again and it was fantastic to meet Ola from the Royal Court and learn from him.

All the other women were lovely and I started friendships which have given me so much encouragement and support by other WITS who’ve come to performances, messaged me about opportunities or written words of encouragement on difficult days following the inevitable rejection that comes with being a writer.

You’ve recently been throwing yourself into Manchester’s thriving spoken word scene, how are you finding it?

I am really just at the very start of this journey, just trying something new. It’s quite scary, there are some crazy talented people about, but so far the different nights I have been to have had lovely audiences and the other artists have been kind and supportive too.

What advice would you give to someone who wanted to write and tour a play?

Get the support and advice of someone more experienced than you. Write a first draft then hear it read aloud by actors, you will learn a lot from doing this and your next draft will be much better as a result. If you are feeling REALLY brave you could do a rehearsed reading for an audience and get them to feedback too. Set yourself a goal or a challenge to have your play performed somewhere or submitted to a festival, competition which means you have to finish it by a set deadline.

If you have never toured a play before, get an experienced producer to help you book venues, market the production and help you find a creative team.  It’s a big job and you’ll appreciate the support. Also get a good stage manager to help the tour go smoothly – one who anticipates what you may need before you even ask – Tom Byrne who worked on ONE FLESH as backstage crew was great at this.

ONE FLESH was published and can be purchased from Amazon.  Also, a few of my poems will be published in the WITS 2016 Anthology and you may be able to hear me live at Open mic events like Word Central, Bad Language, Verbose and The Word at Home.

Who can say for sure?  Hopefully both MY LIFE AS A BANANA and the verbatim Adoption play will tour to venues within the next 18 months.

What I do know is that in Autumn 2016 I will be officially launching my new writing company Brush Stroke Order, which will offer workshops, feedback and performance opportunities for those who write for performance be that poetry, plays, short stories or spoken word. You can follow us on Twitter @BSOwriters or give us a like on Facebook. If you are a playwright or poet interested in workshop opportunities or receiving feedback on your work, please email brushstrokeorder@gmail.com  to start a conversation about how we can best support you.

Challenging (in a good way)