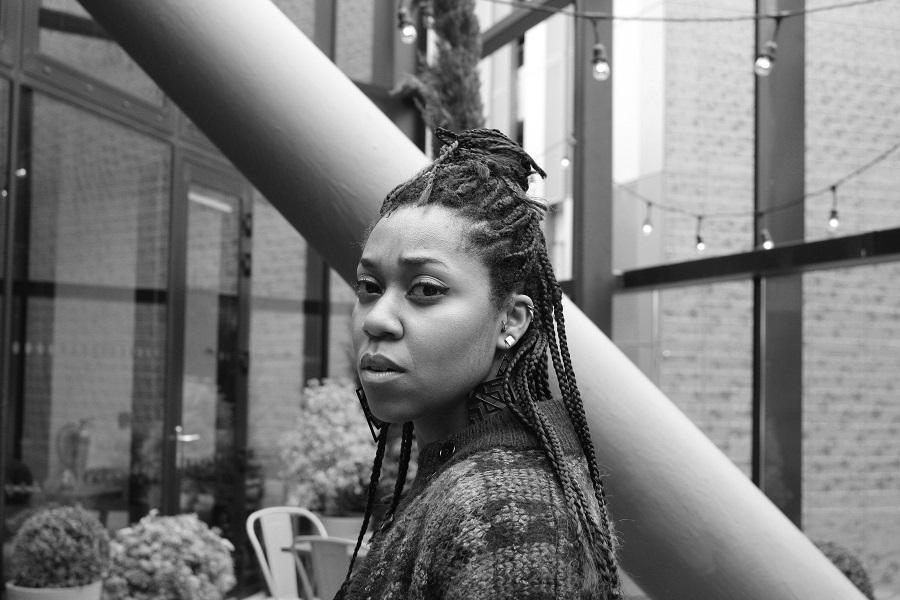 (Nice easy start haha). I would predominantly say that I’m a writer and a performer. I use the broad term of performer because I have a varied background of dance, spoken word, theatre and singing.

I would say that “art” is an instinct, concept, emotion or story that has been transformed into something tangible. Or I might say it is a creative attempt to communicate an idea to anyone willing to engage with it.

At the moment, my art comes to me in the form of poetry, song and script.

Your new play, Man on the Moon will be on at Contact next month. What inspired you to create this piece? How has the process of creating a play surrounding a personal subject been?

I had been thinking about starting a project exploring fatherhood for a few years. It was at the back of my mind but I wasn’t sure what form it was going to take. In addition to that, I found that I was writing about my dad without intent. Whenever I was writing I would make reference to him or my poems would pivot and drive towards him so I knew I needed to get something off my chest. Then by the power of serendipity I was commissioned by STUN to develop a new piece of work after presenting my first solo show there as a part of the Black Gold Arts Festival 2015.

The process has been invaluable because it has pushed me to confront my relationship with my dad. I’ve made some beautiful discoveries and I was able to reach out to him and make some resolutions. The process has been emotional but “easy”. I don’t want the word to be misinterpreted to mean that things have gone swimmingly but I think I’ve been so open and I’ve worked with the most amazing people (Benji Reid, Garfield Allen, Lauren Banks) that the project has flowed from one point to the next. I’ve constantly allowed myself to be led by curiosity and honesty.

Your most recent solo show, I Wish I Had A Moustache had a successful run. What did you learn from this experience and what advice would you give to emerging artists who are considering creating solo shows?

I learnt so much! The main things were: a) to make a clear distinction between myself as a writer and a performer of the work. There must be distance between the two processes and you cannot be too precious. b) Make sure you have a good mentor and a strong team of people who you trust but who also have differing viewpoints and backgrounds to you – it helps to make sure your work has perspective and is accessible. That doesn’t mean trying to create something that panders to everyone but more so avoiding creating something that is insular or makes assumptions about the potential audience. If you have to explain your idea to people, it helps you to refine it and understand it each time. c) Finally, I would say you have to strike a healthy balance between taking ownership but also sharing the process. Just because it is a solo show, doesn’t mean that the project solely belongs to you. You don’t have to / shouldn’t try to do everything. However, you should try to communicate as clearly as possible how you would like to work with everyone, what you expect everyone’s roles to be. And if you don’t know, be honest about that too, have a conversation and establish it as soon as possible.

You’re currently the Young People’s Producer at Contact. What prompted you to pursue work as a producer and how has this role influenced your artistic practice?

I love Contact for so many reasons and this is one of them. Before taking on this role, I didn’t see myself as a producer (although I was clearly working within that parameter on a various projects). I was already connected with Contact as an artist and facilitator so, they knew that I had the skills to fulfil the role and they encouraged me to apply. I had no idea I’d land the role. I’d literally just finished a PGCE in Secondary Mathematics.

It has been a blessing to work as a producer for Contact. I’ve had the opportunity to work with so many interesting people and I’ve learnt tons from every single show and project that I have worked on. They always inform my practice, whether that is creatively or logistically. It has definitely helped me to think about my approach to Man on the Moon. I’ve put everything in place to allow myself to be an artist from the schedule to the budget.

Your poetry career started off with Young Identity and in recent years, you’ve transitioned into theatre. What prompted your interest to start creating theatre? How much of an influence did your experience with Young Identity have on this creative decision?

My poetry career started before Young Identity. I was published in primary school and in high school. My first commission came via Ruth Ibegbuna (RECLAIM) who used to work at my high school and was aware of my work. She arranged my first commission as a poet for a number of exhibitions at the Urbis including Emory Douglas’s The Black Panther exhibition. Also I was encouraged by Community Arts Northwest (CAN) to start performing my writing from age 15. Following this, I joined Young Identity at 17 years old after showing my work to amazing artist and member of Speakeasy, Segun Le French.

I’ve been encouraged to perform from a young age. I did ballet and performed Shakespeare whilst in primary school so theatre/ performance was always an interest for me. This interest was cultivated as I continued to work with various organisations such as Zion (now Z-Arts), CAN and Contact. When Cheryl Martin was at Contact, she was great influence in terms of getting me to think about making theatre.

Young Identity definitely helped me understand the craft of poetry and spoken word. I was given the opportunity to meet some world-class poets; I travelled to America to be a part of Brave New Voices; I went to Arvon and supported artists like Saul Williams and Kate Tempest. All these experiences, gave me the confidence to take myself more seriously as a performer and think about how I could connect my performance backgrounds (dance, singing, theatre) into performing my own work.

You are currently working on your first poetry collection with Commonword. What has been your main inspiration for your collection? What advice would you give to a young writer wanting to approach writing their first collection and/or considering exploring personal experiences in their work?

I’ve been using the same inspiration as Man on the Moon. It’s been really helpful to know that I have another outlet for the material. There is only so much that you can put into a theatre show and some stories or concepts would not work within the context of the theatre show. I’ve been using the book as another platform to explore the concept of fatherhood based on my experiences with my dad.

In terms of advice, I’d say be prepared to be pushed and challenged. Also strive for honesty above anything else and don’t ever assume that you know how the work is going to pan out or come to you.

The next project that I’m going to be focusing on will be incorporating what I’ve learnt as a creative practitioner and what I’ve learnt from training to be maths teacher. Not sure what form it is going to take but that’s the concept that has been rolling around the back of my mind for the last 3 years. By the end of next year, I’ll give it a chance to come to the foreground.

Man on the Moon is playing at Contact from 21 – 25 November 2017 (accessible performance on 24 Novemeber). For more information and to book tickets, click here.