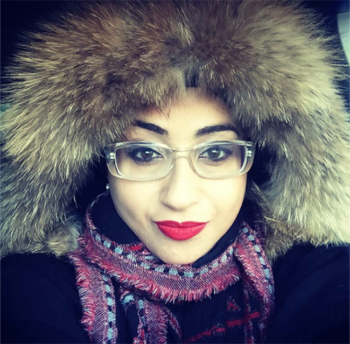 I am a writer originally from London but based in Manchester and it’s taken me a long time to even define myself as an artist. Even now there are days I wake up with suspect fraud-syndrome but have learnt to quell those voices of sabotage and accept myself as I am. I write flash fiction and short stories but love writing poetry more, which I happen to read aloud and therefore am by definition a performance poet too.
I facilitate creative writing workshops within the community and have worked with youth theatres, within schools, with refugees and with women asylum seekers to promote the use of creative agency. I have also worked with south Asian women’s groups and have had the opportunity to perform at academic conferences such as Writing For Liberty 2015 Lancaster, Racism Rights and Resistance 2016 York, CREN 2015 Sheffield and Shared Spaces 2016 Bristol. I was also part of Justice Festival Manchester 2016, Journeys Festival International and the 8th Black & Asian Writers Conference here in Manchester. I am part of two writers collectives, Manchester Muslim Writers and Commonword and recently formed Outside The Frame Arts with theatre practitioner Nikki Mailer.

I define art as simply ‘the freedom of expression using creative imagination’ – in whichever form it takes. I find art everywhere I look, as do many artists sensitive and acutely aware of the world around them. The art I make defines who I am in relation to the world around me – contextualising the time and space we are living in. Writing is a constant cathartic process for me and my growth is situated here. Poetry is my tool – the artistic avenue if you like for expressing myself and challenging the status quo. It speaks to people in a completely different way, transcending the intellect and aiming for the heart. To me it bridges the gap between art and politics.

You’ve recently been awarded a Jerwood Creative Fellowship with Manchester International Festival. Tell us a little bit about what you’ve been getting up to. How are you finding it so far?

Yes, that was a wonderful surprise at the beginning of this year. After the group interview process which I thought was a ‘friendly Hunger Games’ type scenario, I was ecstatic that I had been awarded the fellowship but even more excited about the cohort of five inspiring artists I would be working with.

We have been commissioned to work with specific productions that best suit our interests after in-depth discussions with Manchester International Festival. I am delighted to be working with Theatre-Rites, described as one of ‘Europe’s most imaginative’ theatre companies. Their immersive production is called, ‘The Welcoming Party’ which explores what it means to feel different and why we should all be proud of who we are. I am learning what a blend of puppetry, performance, dance and live music can bring to the stage, what powerful expressions can be made if words are absent. As a poet and writer I find this concept fascinating and hope to broaden my own craft through this learning. There are so many other ways of connecting with people and this to me is enlightening. I highly recommend booking tickets for its July showings. Aside from this we are getting to know what it takes to put a festival together, the marketing behind it and the long-term legacy of MIF once the festival finishes in the summer. We will also have the opportunity to organize our own creative event that will foster a stronger relationship with the communities of Manchester.

You’re also working with Outside the Frame arts, an arts collective who platform Palestinian writing. How did the project begin and what do you think has been its biggest success to date? How can people get involved?

A chance encounter at a synagogue last year where I was sharing some of my work led to a conversation with Nikki Mailer, a theatre practitioner who had been toying with an idea of producing a project that explored Palestinian theatre. We had a shared vision of wanting to explore unheard voices and were keen to collaborate with this concept as a foundation to our work. Nikki is Jewish and I’m Muslim and this underpins a lot of what drives us politically. We decided to co-direct an Arts Council funded project ‘Platform For Palestinian Arts’, in partnership with Panda Arts and In Place Of War exploring plays and poetry from the Palestinian diaspora. A new anthology called Inside/Outside : Six Plays From Palestine and The Diaspora had just been released.=

We wanted to shine a light on those voices absent from the mainstream and our aim was to provoke culture and interrupt spaces especially those that are inherently white within the arts. We facilitated several creative writing workshops in diverse spaces in a bid to counter the inequality and under representation that is prevalent. Our participants were able to engage with cultural narratives they had not had access to before which worked towards a greater understanding of our human story. We provided a platform for those who wouldn’t normally access the arts and we were able to create new work using the material explored as a catalyst.

You have a selection of poems appearing in Commonword’s upcoming anthology, Women in the Spotlight. What inspired you to write these pieces?

These poems I feel were inspired by both the fragility and the strength of the human condition. The ways in which the human condition responds to love, loss, absence and trauma is what I wanted to capture in nuanced ways. The poetry touches upon the duality of life and death, of despair and hope, of reality and the surreal. To You was penned when a loved one died and explores grief and what it means when love has nowhere to go.  The War-Torn Child I wrote, after coming back from the Turkish/Syrian border where we faced many families, especially children, torn apart literally and metaphorically by war. Cumin and Epiphany are attempts to immortalize snapshots of life and childhood and I Am is what I created to remind me of hope. I have had mental health issues in the past and am always fascinated by the different ways our mind and body respond to change. How these experiences define and shape our being. A measure of this, often unspoken is found in my poems. An absence that, in itself, speaks volumes.

My poetry has been published by Crocus Books in the anthology, When Saira Met Sara bringing together Muslim and Jewish writers. I have also had poetry published in Stand Magazine, Scribe and on online forums, I Am Not A Silent Poet, Blue Minaret, and She Speaks We Hear. My flash fiction has been published in a BAME anthology called Elevator Fiction launched in September 2016 by Crocus Books and my poetry is included in a Women In The Spotlight anthology to be released this month titled Sounds That Exceed 80 Decibels.

A spoken word piece as a response to the micro-aggressions of racism, sexism and Islamaphobia I’ve encountered as a visibly Muslim woman can be accessed here, https://youtu.be/yzRL_zzKR5E

I wrote this when, as part of an event raising awareness about hate crimes in the community, we were trolled by individuals claiming ‘there is no such thing as Islamaphobia’ within minutes of sharing our event on social media. Individuals who were essentially white males were trying to dictate my experiences as invalid.

You can also find me tweeting on twitter @Hafsah_A_Bashir or follow my blog on wordpress to find more of my work https://hafsahaneelabashir.wordpress.com which I should update much more than I do.

I have so many ideas I want to explore and projects that all orbit around this idea of accessing the human story, those narratives excluded from the mainstream. I plan to keep going, to keep interrupting spaces and interrogating the norms and expectations society imposes on us, the taboos that exist both within and outside of our communities. I want to create work that counters the misconceptions about Muslims in Britain and other parts of the world that have contributed to the rise of Islamaphobia today. As a woman, as a mother – I want to make sure the world my children grow up in, is a welcoming one that celebrates difference and evolves in progressive ways. How humans interact with each other determines how society functions. Trumpocalypse and Brexit have proved how fear feeds ignorance and ignorance fuels hate. The arts I feel can change the tide to develop better understanding, education and community cohesion.

I hope in my future writing career we can abandon the labels we are prescribed. ‘BAME’ I find problematic sometimes and there are days when I want to just say, I’m human not BAME! That actually we always existed, we were always here and this ‘diversity’ label is just ridiculous, placing an onus on BAME artists to correct this deficit. Other days I feel it necessary these distinctions are made especially in a world where so much inequality exists. I have been to many events where I will be the only non-white person and this can be troubling as well as empowering. It’s finding that balance between being valued on the merits of your talent or wondering whether someone somewhere is filling a quota. Having said that, I am glad that the arts seem to be recognizing the space that must be given to BAME artists, and Commonword’s work in this respect is invaluable, but I would love to see this across the board. We have so far to go yet before what we see before us is an accurate representation of our society.

This year I am also working on The Royal Exchange’s 1947 partition project ‘Memories’ which will be showcased in September, making connections with people who have stories and experiences to share. This year marks the 70th anniversary and unless archived, my fear is that we will lose those narratives along with the generation of people who experienced much trauma during this turbulent time. This is dear to me as my grandmother was 17 during the partition and her family were one of the millions of families on the move.

Apart from this I hope the future holds a collection of my poetry being published one day. More so I hope that I can carry on working with (and learning from) underrepresented, marginalized and disadvantaged communities to find their voice and be heard while being aware and keeping my own privilege in check. It’s so important for us to function to our full potential and finding myself through my art has been of great value to me. I have found myself as an artist, gaining confidence by pushing myself out of my comfort zone which has been as equally terrifying as it has rewarding. This kind of awakening is the revolution I want to see everywhere. Harnessing our true potential and investing in ‘artivism’ and its potential for change!