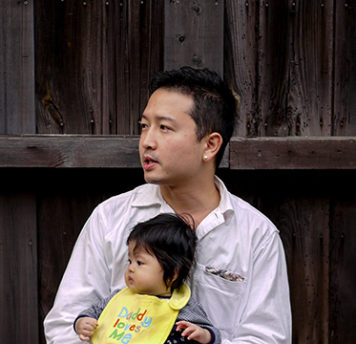 Tell us about yourself as a writer and artist.

I’m a poet and artist, using different languages from Japanese to English, photography, drawing, installation and film. For poetry in the narrow sense, I do something I call dualingual poetry integrating Japanese and English text on a white space. I also have some awarded short stories and a self published poetry novel in Japanese called “fish noci”.  Which was described rightfully by HOSAKA Kazushi (personally I’d say the best novelist alive);

“When you read this book, words come into you like water sinks into sand. There are words like ‘ocean’ or ‘mountain’ in this book, just simple words without any description, yet I find myself feeling ‘ah, there’s an ocean there’, ‘ah, there’s a mountain here’. I don’t think I’ve ever experienced something like this before.”

You could say my works are minimum, ontological, and that goes for other mediums too, like the sculptures I did for the FLOWer exhibition (a book designed by Dan Tomimatsu) or the installation of a future myth I did on the window glass of Takato Museum or the awarded short film “O” I did with friends, using a water drop lens.

What are the ideas that interest you in your art and writing?

Primarily, it is to accept beings as being themselves. Without leaning on meaning or story. To accept a rock as a rock, a plant as a plant, a word as a word, without anthropomorphising or exploiting them. If you look at it the other way around, we don’t own/know anything, not our body, not ourselves. Everything including yourself is other to you. To create a work is to get along with these objects including yourself, a holistic attempt to understand the world.

This is also to do with the idea of freedom. Because I take language seriously, I believe words should be emancipated too. Free from meanings, purposes, grammar etc etc. Which is a sort of freedom that cannot exist in our world. And this sort of possibility has been pursued in the 20th century by various artists. Yet, I believe there is more to do.

In a different layer, I am interested in universality and change. What I mean by that is how we may change and not change in this age of bio-digitalism. I’d consider things like animism, myth or dance as universal and bio technology, robotics, artificial intelligence as change. The crossroad where these two currents meet is where we stand and what we should express as artists living in the beginning of the 21st century.

You are currently studying for a Masters in Visual Anthropology; how would you describe the interplay between your academic interests and your work?

Do you have an idea of who your audience is and is that important to you?

No, and yes. Let me put it this way. My audience is everyone not even limited to human beings. I’d be thrilled if a pebble or a flower would come up to me and smile “Your work’s amazing, dude”. A dancer that I admire, OHNO Kazuo said that “If your dance touches someone in a million years, it works. But if your work does not communicate with anyone forever, it’s bad. To think and imagine in a million years time span, and not to fear solitude is what I received from OHNO. At the same time, I think of it in a more micro scale. Whenever I make something I always have a single person in my mind as an audience. Usually my wife Yumi but sometimes friends, but always someone I actually know. If my work could really touch that person, as Ohno says, it works. And for a whole lot more.

How would you describe what you do to someone who knows nothing about literature or art?

I guess I decided to become a poet because I wanted to tell the truth and the truth only without distorting it. In other words, I sing for the unheard, weep for unanswered prayers.

If you could offer advice to your younger self about being a writer and an artist, what would it be?

You make only what you are. You ain’t worth a dime. Go as far as you can. Create for someone you care about, not for yourself.

When I had my daughter two years ago, I wondered; If she had a child and if that child had a child and that child had… on and on and on, her gene may survive till the end of mankind. And if you look from the opposite direction, her gene traces back to the beginning of life on earth. Compared to her, how long can my work go back, and how far can it go? To maximize this time span, in other words, to have poetry=art compete with life itself is my ambition.

I’ve pasted some links before, but you can find it online on my website. The ones that are accessible to English speakers will be dualingual poems under ‘poetry’ section which contains about 20 poems. And also ones under ‘exhibition’ and ‘short film’ section.  Here are the links to exhibition 1, exhibition 2 and short film. Also, I am now working on a dualingual poetry collection book with Commonword which will be published in the near future.

Sum up your experience as a writer thus far in one word.

Commonword will be publishing fukudapero’s poetry collection in Autumn/Winter 2018. Take a sneak peek at his poetry here: midnight stainless and mid summer afternoon.