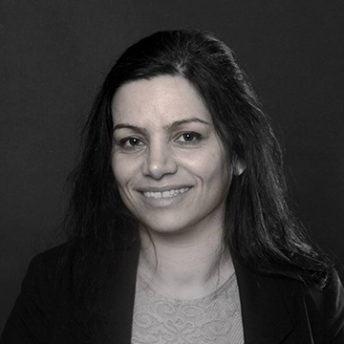 I am a writer and theatre maker originally from Iran. I studied Politics in Iran and worked as a teacher, researcher, commentator, and news editor. In the UK, I studied Creative Writing and became a freelance artist.

For me, art is a way of expressing myself and communicating with people. It sets me free from the mental pressures and chaos of life in exile and helps me be anything I want to be.

You’re an artist in residence at Community Arts North West and have just completed performances of your debut one woman show, One More Push. What have you enjoyed about developing your first show? What were the major challenges?

The most exciting part of my residency has been collaborating with many artists from different disciplines and backgrounds, and being part of two amazing festivals. During my residency at CAN, I have learned how to manage a project, how to communicate with fellow artists on a professional level, and learned the language of the art world. Katherine Rogers my producer and mentor and Cilla Baynes have provided incredible support since the start of the project.

The main challenge has been adopting myself into a new world which I like to describe as highly professional and competitive. Stepping into a different discipline takes a lot of courage. Sometimes people ask me how did I become a performer or a playwright and often my answers fascinate them. I love to discover new avenues and have the courage to hit a new road. Challenges are catalysts. They make me move and help me push my boundaries.

You’ve recently set up an arts initiative to support BME artists called Sheba Art, supported by Commonword. What inspired you to set up the group? What do you hope participants gain from being part of it?

The idea of setting up a self advocacy group or company came to my mind earlier this year when I attended two symposiums at Manchester University Drama School. At both events, I hardly saw any participants from black, refugee or migrant communities. The art sector is dominated by white (mainly male) middle classes.  Then I thought why not do something about it? So the idea behind Sheba arts is to bring arts to/from migrant communities to mainstream society, using artists from those communities. Sheba Arts is going to work as a bridge to connect communities, encourage cultural diversity and facilitate integration through arts in all forms. We recently received a grant from PANDA Arts legacy fund to create a website for the group and I am hoping that the website will be set up in the next few weeks so that it becomes a platform for artists from migrant marginalised communities to help them connect with each other and with artistic opportunities.

Our first project, in collaboration with Commonord, RAPAR and Journey’s festival has been successful and a group of refugees we worked with, showcased their work at the refugee event in the Witworth gallery. We have been invited to work with Journey’s festival at their next festival in November.

You’ve completed a directing course at HOME – how do you feel that the practice of directing has influenced your approach to writing for theatre?

I had the chance to attend directing courses, stage one and two, at HOME, lead by the wonderful Cheryl Martin. That training has had such a profound impact on my approach to theatre making and informs me in many different ways. I used that experience to direct my own show One More Push, which received positive feedback from audience and reviews. Also, I ran 18 sessions of drama workshops for a group of refugee communities which culminated in a showcase at the Witworth gallery, as part of refugee celebration day. Directing is more fun compared to writing and performing and I would like to step into it in the future.

You’ve been a writer at Commonword for several years and had work published in our newest anthology, Shots in the Dark. What have you enjoyed most about your time with us and how has it helped you grow as a writer?

I think I have been a writer at Commonword since 2011 when I attended my first workshop at the old office in town hall. I had written my bio, about 400 pages, and I wanted to publish it very quickly. It’s funny that it has never been published and it is still saved on a hard drive. I wrote that in a journalistic style as I didn’t know much about creative writing. I left after a few workshops, and started writing short stories and plays in Farsi and English which appeared in anthologies and online magazines, including a radio play which was published in an anthology by Leicester University in 2015. I wrote my first poems in English last year when I did my MA at Salford University.

A few months ago, I joined Commonword Identity workshops again after a big pause and I feel like I have things to say now as I know a bit about literary theories and writing techniques. We have a friendly atmosphere and, can support and learn from each other.

If you could offer a piece of advice to your younger self about being in the arts industry, what would it be?

Keep trying and never be disappointed. And, stop thinking about English not being your first language.

I am about to start another adventurous journey with Eclipse theatre and I got a writers’ residency to work with leading dramaturg Ola Animashawun at York Theatre Royal. I will be working on a new play during this residency. For the future, I am hoping to write more plays and poems as well as continuing to explore the theatre world and performing on stage.