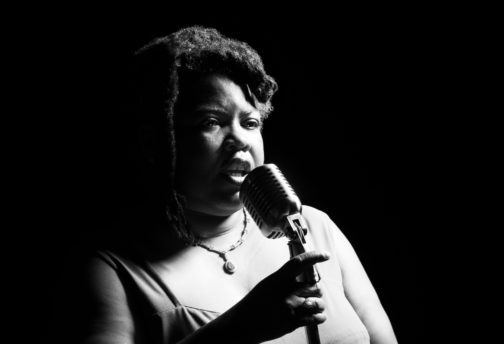 I think, for me, art is something that shows you how life really feels. As a director, I don’t have a favourite type of play or show, but I like working with writers who don’t pull their punches, and communities. I can get community actors to do more risky work, perhaps because no one told them what theatre is supposed to be. Sometimes when working on refugee community plays the emotions and situations are so raw, I’m overwhelmed.

For the work I do as a writer/performer, it’s so far all about the kinds of things, people – let’s be honest, things that I can’t talk about: my experiences with severe mental illness, my baby brother’s death. Sometimes, it’s up to artists to express the inexpressible.

Your new show, Who Wants to Live Forever? will be on at Contact this month. What inspired you to create this piece?

It started as a piece about why people are so fascinated with watching stars crack up on stage, fall apart, like Billie Holiday or Amy Winehouse. So I started with how stars in the sky are born, and fall. But it became more about how I learned how to sing by listening to Billie, and my relationship with my brothers and sisters, singing them to sleep. That’s when I realised I needed to talk about my brother.

That makes it sound as if it’s all sad, but none of my work is like that – it’s always also funny. I guess that’s how I see things.

Back in 2014, Commonword published, Alaska. Since then you’ve been touring the piece. What do you enjoy most about performing Alaska and what do you hope readers can take from the text, if they haven’t had the opportunity to see it performed?

Alaska is a difficult piece to perform, because I relive what it felt like to lose control and spend months in an asylum. But because I perform it in a very intimate way, around a table or in a small circle of people, I can feel the audience reaction, and I can float on the places where they’re laughing with me, and their compassion when the telling gets tough. People nod all the way through as they recognise either themselves or folks they know – it’s that connection that I enjoy most. I think doing these plays is the only way I can communicate some of my experiences.

I hope people can take the playfulness and the trips to the moon and tropical islands and enjoy them from reading the text. And I hope for those who are like me, that they realise they’re not alone, and that you can come out the other side and find life beautiful.

You recently directed Flying Carpets as part of Journey’s Festival International. What did you enjoy most about working with the artists involved? How do you feel your practice as a director influences you as a writer?

I’ve been working on and off with Community Arts Northwest [CAN] as a director since 2010, doing work with refugee and asylum seeker artists and communities. What I loved about Flying Carpets is that I had already worked with almost all of the artists involved. In this show, I got to see them create imaginative pieces that were funny, touching, compelling – just good work. One of the musicians was a man I knew from his day job, and he was wonderful. Lots of fun.

I originally went to an emerging Black and Asian directors’ course at Contact, way back in 2002, because the radio producers I was working with back then kept complaining about the way that I ended my radio plays. So I thought, I’ll take this course and learn a bit about how a director thinks so I can fix it. Turned out I loved directing; John McGrath [who was Artistic Director at Contact then] encouraged me and gave me work. Directing for me is much, much less angsty than writing and performing.

You’re one of Eclipse’s Slate Enablers. What does your role entail and why do you feel it is an important resource for northern creatives? Has it had any influence on your own artistic practice?

Slate is about promoting and supporting diverse artists who live in the North of England. I’m based in Liverpool and Merseyside, mostly because I’ve worked there in the past, and feel that there is such a lack of support for the diverse artists from that region. Things have barely moved on since the mid-90s, when I worked at Toxteth Library as a Black Literature Development Worker.

I’ve been meeting artists – that’s how most of my time is spent, talking to artists, trying to find out what they want for themselves and what will help. There are a lot of ways Slate can support people – from small pots of money to try out a new idea, no strings attached, to helping with production, marketing, PR costs, finding mentors. But we also just had a call-out for four new commissions; I’ve facilitated Regional Theatres Young Directors’ Scheme [RTYDS] Intro to Directing week; we’ve had a residential week on collaboration – and both those weeks were free to participants, accommodation and travel covered. We’re planning loads of one-day skills workshops on things like setting up your own company, how to be self-employed and do your taxes, plus artistic things like a making a film in a day.

And I’m only one of six – we have one Enabler in Manchester, one for Leeds and Bradford, one for Hull, one for Newcastle and Gateshead, and one for Sheffield/Doncaster and South Yorkshire.

Slate’s influence on my own practice so far is that talking to so many artists and doing the directing masterclasses has made me much, much more ambitious about the scale and reach of my own work. I need to think bigger: tour more, get into the international scene. Through Slate, I’ve started going to the IETM, a big international theatre get-together in Europe, and started to make connections.

Black Gold Arts Festival returns to Contact this month. What does the festival have to offer this year and what are you most excited about offering to audiences?

BGAF this year is all about developing and showcasing new talent: three new writers from Manchester, Ruby-ann Patterson, Nasima Begum [who just worked on Hatched at Contact], and Jamie Lee are joining Guardian columnist Claire Hynes in creating brand-new monologues. The writers will be mixing their work with new choreography and dance in a work-in-progress , Nuclear, at Contact 18th November. It’s going to be fun.

Plus, I’ll have finally finished developing Who Wants To Live Forever, which will be on at Contact on 17th and 18th November.

Plus, Keisha Thompson, whose first show was in our first Festival, will be doing a workshop on Afrofuturism – black sci-fi! Who can resist that? It’s an appetiser for her new show, Man on the Moon, which will be at Contact from the 21st to the 25th of November.

I’m chasing Stacy Makishi, the marvellous one-of-a-kind director and performer, to work with me on a show that will terrify me to do. More on this if I catch her.

I’d also like to finish a novel I’ve begun, but that will take a lot of discipline. I’ve never been very disciplined about my writing, so this is a big challenge.