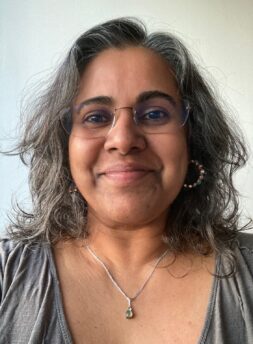 EDIT: On Thursday 2nd June Sui Annukka was awarded the Discoveries Prize 2022! Congratulations to Sui from everyone at Commonword/Cultureword 🎉

Commonword alumni Sui Annukka has been shortlisted for the Discoveries Prize 2022, run by The Women’s Prize Trust, Curtis Brown and Audible. It aims to find aspiring female writing talent from across the UK and Ireland. She is one of 6 authors selected from 2500 entries.

Of Sri Lankan heritage, Sui Annukka grew up in London and Colombo. She read Drama at the University of Bristol, and later studied Production Design at the National Film and Television School. She left her career in film art direction to spend more time on her writing.

Whilst living in Manchester between 2013 and 2018 Sui participated in Commonword’s Women in the Spotlight programme and had her writing, both flash fiction and poetry published by Crocus (in Shots in the Dark, Sounds Exceeding 80 Decibels and Elevator Fiction).

Sui commented on the impact of her time with Commonword:

“I absolutely loved living in Manchester. Commonword was a huge part of my Manchester experience. I was warmly welcomed into a longstanding writing community and encouraged to experiment across different media. It was such an exciting time in my life. I was writing consistently and spending a lot of time sitting in cafes, late into the night, talking about books, and theatre, and films – and writing – with the most brilliant people. I was given opportunities to perform my work and to start finding my voice. And, crucially, Commonword gave me my first experience of being edited and published in an anthology.

I was mentored with unwavering commitment and dedication by the genius that is Martin De Mello; and continue to be championed by the inimitable Jennifer Nansubuga Makumbi.

I have no doubt that being part of Commonword enriched me as a writer and as a human being, in ways that I can’t even begin to credit. I would not be on this longlist without them.

Congratulations to Sui from everyone at Commonword & all the best for the upcoming prize announcement!