They Called Us Enemy by George Takei

They Called Us Enemy is an autobiographical graphic novel which tells of his family’s relocation to the Internment Camps. These were set up for American citizens of Japanese origin after the attack on Pearl Harbour in December 1941 during the Second World War. After the attack, the west coast of America was designated a Military Zone. Japanese Americans were thought of as a potential risk to security and so were forced to leave their homes and businesses, pack what they could carry and were transported to the camps. Anything they couldn’t carry they had to sell – including their homes and businesses – which were all bought up cheaply as the locals knew the Japanese Americans had no alternative.

George was only four when this happened, leaving Los Angeles to be relocated in mid-America, and spent the next four years of his life with his parents and younger brother and sister in the camps until Japan surrendered in August 1945. Being so young he initially remembered it as a big adventure, helped by his parents who didn’t want their children to worry about leaving their former life behind. As a teenager, he became more aware of the sacrifices his parents had made and the hardships they endured through conversations with his father. His father told tales of solidarity within the camp, even though there were threats of deportation. But even after their release, his father was still patriotic towards America defending the reasons for internment and their fight to remain and avoid deportation. 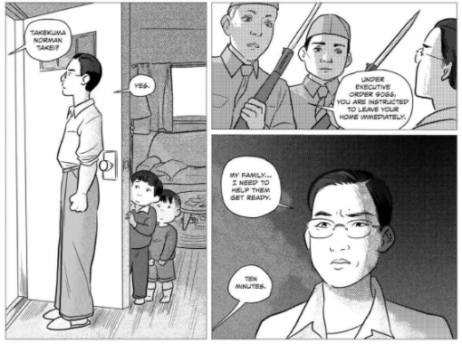 There are parallels made with modern day America such as the ban on Muslims entering America and Mexican children being separated from their parents during Donald Trump’s presidency. But the rest of the book describes his later life – how he met Martin Luther King as a young activist and his friendship with Nichelle Nichols, who played Uhura in Star Trek. He even had a role in the 2015 stage musical Allegiance which told this little-known story of Japanese American Internment Camps.

The themes of this graphic novel are US history and how society learns little from its past, family life and how a community can band together through adversity.

The art by Harmony Becker is clean and simple and George’s 2 other writers, Justin Eisinger and Steve Scott help produce a well laid out story which skips from past to present without being confusing and keeping it interesting. The history is a little sugar coated, but it is being told from a child’s perspective protected by the parents.

The graphic novel was first published in 2019, with an expanded edition released in October 2020. The new edition doesn’t expand the story but contains old family photos.

It was an enjoyable read, light and entertaining from someone I like and admire. I’ve read other biographical graphic novels which cover German Concentration Camps (Maus by Art Spiegelman) and life in Japan during the war (Barefoot Gen describes life before and after the bomb in Hiroshima) and They Called Us Enemy compliments this by telling the little known history of Japanese Americans.