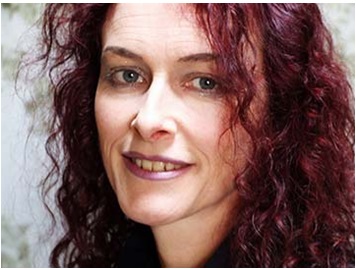 Born in London to a runaway teenager, Rosie has always been a cuckoo in the nest. She’s an eclectic writer and performer, ranging from singing in cult gothic band The March Violets, to twisted alter-ego Rosie Lugosi the Vampire Queen and has performed across the UK, Europe and the USA.
Rosie was a key member of Commonword’s Survivors poetry and Northern Gay Writers groups. She was published in two Commonword anthologies ( City Secrets 2002 and Bitch Lit 2006 ). She has been a regular host for Commonword’s poetry events, including its Slams. In 2007 she received a bursary from The Literary Consultancy for a year’s writing mentoring.
She has five solo collections of poetry and the latest, Everything Must Go (Holland Park Press, 2012) tracks her experience of throat cancer. Her award-winning short stories, poems and essays have been widely anthologised.
She is proud owner of the DaDa Award for Performance Artist of the Year and a Poetry Award from the People’s Café, New York. She also won the Mslexia Novel competition in 2012 and her debut novel The Palace of Curiosities was released in March 2013 by HarperCollins.

My first experience with Commonword was attending workshops, in particular Northern Gay Writers and Womanswrite. These workshops provided a springboard to creativity. I met other writers in a nurturing space, with facilitators who encouraged rather than shredded tentative beginnings. I’ve never forgotten how helpful that was: however much we toughen up, new writers need and deserve encouragement to build confidence.

read her writer of the month interview here: https://www.cultureword.org.uk/writer-of-the-month-rosie-garland/