Click here for an exclusive interview with the 2015 slam winner, Paris Kaur

The Superheroes of Slam final took place on Friday 23rd October at Three Minute Theatre, as part of Manchester Literature Festival (MLF) 2015. This was the fifth occurrence of the poetry slam competition, which has become ever more successful year on year. Since June 2015, nine heats have taken place across the North West, Yorkshire and the Midlands. There has been high uptake at all the slams. At the Leicester heat, the first round had 20 participants and the equally popular Manchester heat required a reserve list within the first 48 hours and 11 potential slammers were on the waiting list four weeks prior to the event. A diverse and talented group of individuals have slammed across the nine heats. Audiences have been packed with 50+ attendees at events.

The slam final had an overwhelming level of interest and was a sell-out event. Our nine heat winners graced the stage with an array of poetry. Content covered a wide range of topics from politics to superheroes to relationships to mental health to child abuse- the list goes on. The standard of performances was exceptional with members of the audience and those following our live social media feed sharing comments such as:

All performers certainly brought their A-Game and displayed their wonderful wordsmith abilities, creating a range of beautiful, comical and dark images for the audience. A couple of striking lines from the evening include:

Remember the times of plenty. Having plenty of time. Time for ideas to be written and erased.

I thought love was just a word. People who brought dairy milk and candle lit dinners for Bella Italia or wherever idiots go

I am more than a moment, I am forever

As the competition heated up, a number of 10s and 9s were given out by the judges . Whilst final scores were counted, we had a fancy dress competition. The winner was Sheffield heat champion, Sarah Thomasin, who went home with a cash prize.

But, of course, there could only be one winner. Paris Kaur emerged triumphant as our winner, her second poem on the theme of child abuse moved the audience and won her the slam champion title. She also received £250 and a voucher for a course of their choice at Arvon*. The event was a huge success and was an entertaining and engaging evening for all who attended. Attendees later took to social media to congratulate the winner and share their thoughts on the evening. 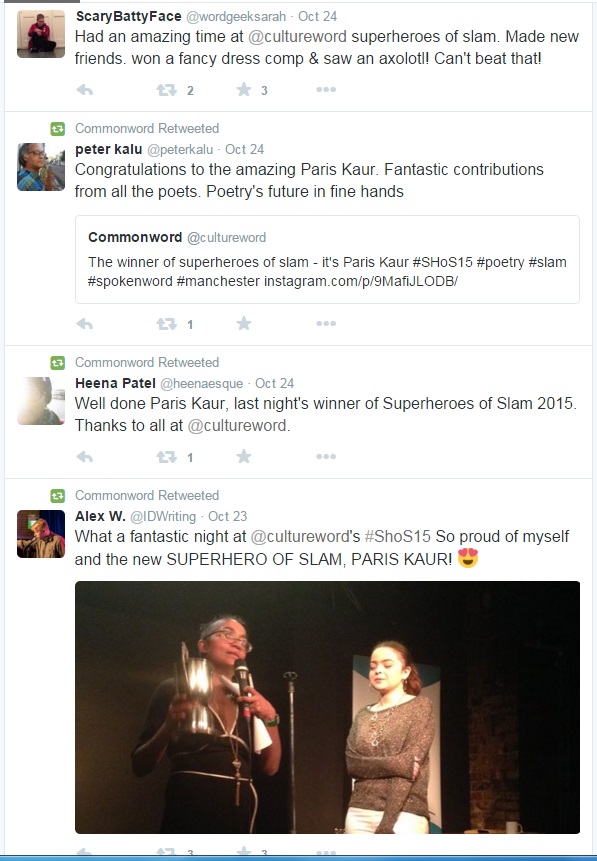 See below for the pictures from the event.