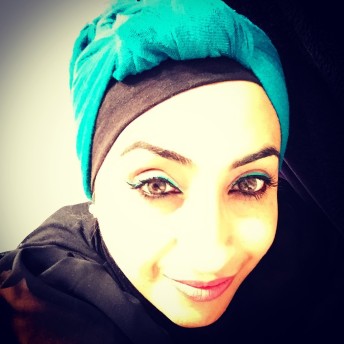 Hafsah Aneela Bashir is a poet and spoken word artist who currently completed an MA in Postcolonial Literary and Culture at the University of Leeds. Her work with NGO’s, providing emergency supplies and medical aid to conflict zones informs her creativity producing a form of lyrical activism. Her poetry has been published by Crocus Books in the anthology, ‘When Saira Met Sara’ bringing together Muslim and Jewish writers. She writes to raise awareness about social injustice and has a keen interest in writing as a form of resistance and liberty. She has worked with Women Asylum Seekers Together to use creative agency as a means to highlight demands for basic human rights. Also part of a writing collective called Manchester Muslim Writers, she conducts poetry workshops within the community working with young people to develop understanding of identity and empowerment. She has performed for Oxfam, RAPAR, Freedom From Torture and interfaith events and can often be found at open-mics in and around Manchester in her spare time. Her latest project involved scriptwriting a short play with Women In The Spotlight and Three Minute Theatre. She was recently invited to create and perform her poetry at Manchester Cathedral to commemorate the 20th anniversary of the Srebrenica genocide.

read her writer of the month interview here: https://www.cultureword.org.uk/writer-of-the-month-hafsah-aneela-bashir/