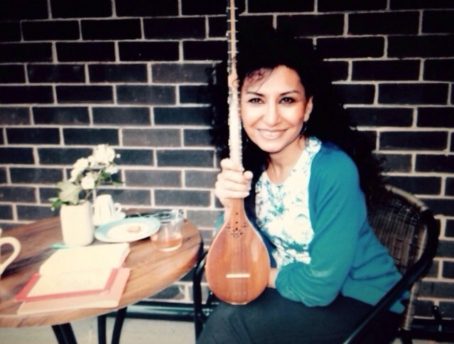 Firoozeh Fozouni, born in Iran, Tehran, was nurtured in an artistic family environment. Her gateway to the world of art began by learning Ballet at an early age. Her love for Poetry, writing, Music, Painting, and Sculpture set her on a path to be trained by some of the best masters in these fields.

Firoozeh studied music at university in Iran. She is a prolific musician and a member of a recognised Classical Persian Music Society. She has published three poetry books (12 of my books were not allowed to be distributed and sold) which have been translated to German, French, Spanish and Chinese. She is recognised as an established and well respected Visual Artist by introducing
new style of painting using Stones and other decorative objects in order to demonstrate 3D images. This was well received in her galleries by the critics in this field in Iran.

Firoozeh immigrated to United Kingdom, London in 2014 and endeavored to gain her rightful status as an artist in UK. She has conducted Charity and Benefit Concerts in conjunction with other prolific musician for well known institutions such as ​UNICEF. She has taken part in several successful Theatrical Productions such as ​“Journies Festival International”​ and ​“Solitude”​, ​“Flying Carpet”​ in which she offered her artistic services and expertise voluntarily and Free of Charge.

Firoozeh is has worked with ​C.A.N. and PANDA. She is currently in the process of translating all her published book in to English.