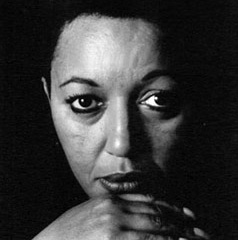 SuAndi firmly believes the eighties were the best years for beginning a career in the arts. She joined Identity Writers Workshop and later became one of the co-founders of Blackscribe, the North West’s first Black women’s writing collective the members. Subsequently joined National Black Arts Alliance where two years later in 1985 SuAndi became NBAA’s freelance Cultural Director. She was appointed the Black Women Writers Development worker at Commonword  where she shared an office with Lemn Sissay. Blackscribe opened up performance opportunities while Lemn was constant with advice. In close collaboration with a team, SuAndi co-edited Commonword’s first anthology of Black poetry Black and Priceless.
Presently an Honorary Writing Fellow at Leicester University SuAndi’s career has taken her into every major European country and she has performed in North America, Brazil, India and Africa. She held a residency at New York University [TISCH 2009]. Her professionalism has been acknowledged by NESTA, Gulbenkian Foundation, and Winston Churchill and in 1999 she was awarded the OBE for her exceptional contribution to Black art.
Alongside her own collections she is published in anthologies including Cultureword and has an extensive list of chapters in academic print. Presently an Honorary Writing Fellow at Leicester University, SuAndi has written the highly successful libretto for Mary Seacole the Opera AS WELL AS narrative for exhibitions. She also has prominence as a keynote speaker.

“Remembering where you started is important. The National Black Arts Alliance is my family. Commonword and Blackscribe were my roots.”