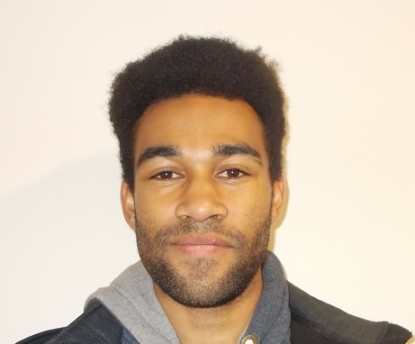 Meshach is an autistic poet and spoken word performer from Manchester. He has a very polarised personality and this is reflected in his poetry style. He has a dichotomy of being deeply philosophical and uses dry humour in a ridiculous way. There is uncertainty at times whether he is being serious or acting sarcastic for the fun of it. Meshach is a member of Young Identity and Identity writers group. His poetry has been featured in Commonword’s ‘Sweet Tongues’ Food Poem Anthology (2013). He has written for and performed in  Young Identity’s ‘Battle of the Minds’ (October 2014 and 2015) at the Contact Theatre, as part of the Manchester Literature Festival. He also performed spoken word for ‘Chaos to Order’ music project with Brighter Sound’s Echo Trace in May 2015, co-wrote and performed in ‘Stagnant Change’ in September 2015 at Z-arts. Outside of the poetry world, Meshach started his artistic journey in visual arts and continues to explore his interests in performance art, drawing, printmaking and watercolour painting. He is an avid sports fan and plays for Manchester’s handball team.