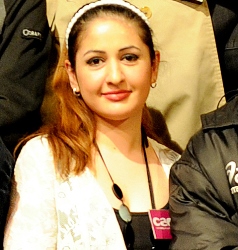 Mahboobeh Rajabi is a Digital Artist/Writer who specialises in Animation, Graphic Design, Moving Image and documentary, and has been participating and working with Community Arts North West (CAN) since 2011.
Her professional writing background goes back to 2011 when she wrote her first screenplay, “Happy Endings” as part of the Exodus Film Jam running by CAN. In 2012, she had her first poetry publication “My Maria” in the “Big Writing For Small World” book, as part of the English PEN project in partnership with CAN.
In 2013, she started her own creative writing workshops for one year called “Seasons Writing Workshop”, alongside her media and digital works. The workshops were held every season to improve writing skills through studying literature and different writing styles.
Her professional portfolio has had international reach to Japan, with one of her stop motion animations- which was based on her independent visual research on Far East of Asia in 2014-2015.
Along with highly successful community projects as a Digital and Media Artist with CAN, she is currently working on her writing with Commonword. She believes Commonword was the best place for her to improve her focus on her writing and develop her skills.