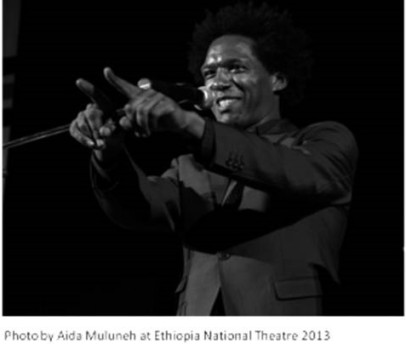 Lemn Sissay is associate artist at Europe’s largest arts complex, Southbank Centre. He’s the first poet commissioned to write for the 2012 Olympics. His poem Spark Catchers  is etched into a Transformer on The Olympic Site. He is an honorary Doctor of Letters. He curated the world’s first Literature Festival of The Sea. His Landmark Poems are written in throughout Manchester and London. In London they adorn The Royal Festival Hall and The City. His Landmark Poem Gilt of Cain, commissioned by City of London is  based near Fenchurch St station and was unveiled by Bishop Desmond Tutu in 2006.  In 2010 Lemn  travelled to The Arctic with Jarvis Cocker, Laurie Anderson, Martha Wainwright, KT Tunstall,  Lesley Feist. He is featured in Burning Ice, a film of the voyage. Also from the voyage Sissay’s video installation what if was exhibited at The Royal Academy alongside Tracey Emin and Antony Gormley in Un-Fold.

Lemn is author of a series of books of poetry spanning twenty five years He reads on stages throughout the world. He is an Honorary Doctor of Letters and was awarded the 2010 travelling award scholarship from the Society of Authors. His play Something Dark directed by John McGrath (artistic director of National Theatre Wales)  has been performed throughout the world. BBC made a television documentary about his life – Internal Flight. In 2010 he was made a MBE by the queen of England for services to literature. Lemn is Patron of The Letterbox Club and The Reader Organisation. He is inaugural  Trustee of World Book Night. He is 2013 Coram fellow.

His work was the inspiration for a concerto at The BBC Proms written by Fraser Trainer and performed by Viktoria Muldova. His  poetry artwork  What If has been exhibited at The Royal Academy alongside Antony Gormley and Tracy Emin and has toured throughout the world from Tokyo to New York. His 21st Century Poem featured on the  multi million selling award winning album Leftism. His photograph taken by Madeleine Waller has hanged at The National Portrait Gallery. The University of Huddersfield runs The Sissay Scholarship which funds a PHD for a  student who has been brought up in care.  Sissay’s radio documentary Child of the State was nominated for the 2010 Sony Awards. His Ted talk has been seen across the world. If you should Google “Lemn Sissay”  all the returning hits will be about him. There is only one person named Lemn Sissay in the world.

“As a black writers development worker at Commonword from 1985 to 1990 I have seen careers of North West writers enhanced supported and then flourish.  Commonword is vital.”