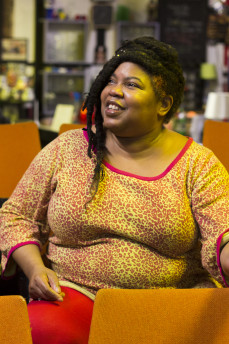 A member of Commonword’s Identity creative writing workshops in the late 1980’s, Cheryl first perfomed her poetry with other identity members at the Old Steam Brewery, Oxford Road, and she’s proud to have served on its board and as its Chair for a few years in the 90s.  She has gone on to become Artistic Director of Running to Paradise, which had a sell-out hit at the inaugural Manchester International Festival with the UK premiere of Us-Pulitzer-Prize-winning writer Suzan-Lori Parks’ VENUS for PANDA.   In 2011, she directed sell-out immersive hit with Another Country for Community Arts Northwest [CAN].  She served as Children’s Director for Manchester Royal Exchange Theatre’s production of A Raisin In The Sun by Lorraine Hansberry. As Director-in-Residence at Edinburgh’s Traverse Theatre, she directed the first production of The Ching Room by Alan Bissett [Critics’ Awards for Theatre in Scotland-nominated, brought to the Royal Exchange Theatre Studio Oct. 2010]. She also produced the Traverse’s The World Is Too Much breakfast plays [Edinburgh Fringe First 2009], directing Heaven by Simon Stephens and Posthuman Satire Slash Romance by Chris Hannan for the series. She’s been Associate Director New Writing/New Work at Contact, won an MEN Award for Best Studio Production directing Rona Munro’s IRON, and won another MEN Theatre Award for writing community play Heart And Soul for Oldham Coliseum Theatre. Cheryl was Artist-in-Residence as a poet for the 2002 Manchester Commonwealth Games, published her poetry and had over twenty stage and radio productions as a writer. In 2011 she directed an outdoor immersive extravaganza, A Game of Consequences,  with Contact Young Actors’ Company as part of x.trax festival, while in 2012 she directed and wrote an updated version of Aristophanes’ The Birds for new disabled theatre THE UNUSUAL STAGE SCHOOL as part of WHOSE FLAME IS IT ANYWAY? in the run-up to the Paralympics.  This year, she’s directing another immersive play with a cast of women refugees and asylum seekers, Heart’s Core, for CAN.  And after all these years, she will soon be publishing her first solo collection of poetry with Commonword – who else?