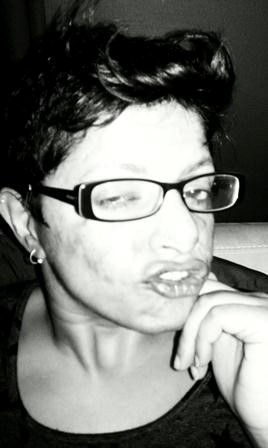 Col is a psychologist and poet. Her contact with Commonword was firstly as an audience member in the ‘90s. She saw Culture/Commonword make visible those poets often drowned out by the mainstream including female, Asian, black, lesbian, trans and gay writers. She noticed the profile given to Black writers through Identity’s development of young writers.  She was participant/audience member in poetry slams and poetry events (e.g. event with Queer up North and Love Thang); which she says was an invaluable opportunity to meet poets.  She went on to participate in a women’s day project RiftCuts in 2010; a space for local women poets marginalised by a male/slam dominated poetry scene. She participated in the Free Read Scheme and heartened by feedback from established poets, she sought a mentor located through Commonword to gather support to improve her writing.

“Commonword helped me no how what to right. Innit.

you too can etch a lirric without always sometimes having to binnit..”