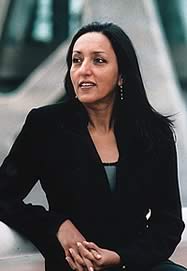 Anjum has written several original radio plays. Her most recent radio play, aired in January 2012 is Surrounded by The Enemy, a play inspired by the real-life story of a Native American who is believed to have been buried beneath the streets of Salford. Anjum has also written  two series of her original Woman’s Hour drama, The Interpreter.  She has written for Doctors and has an original screenplay in development.  Previously Anjum has taken part in numerous writers’ residences and her stage credits include two stage monologues for the People’s History Museum in Manchester.  She is an honorary writing fellow of Manchester Metropolitan University and has worked as writer in residence for the Kali Theatre Company. Anjum is also a published poet.