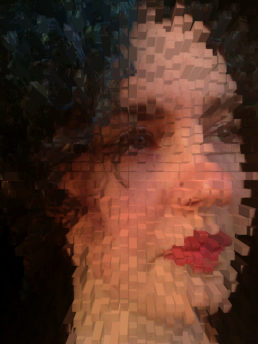 Without art I become ill, and I don’t mean that in a precious sense but in an entirely visceral way. I have finally realised that it is a healthcare essential for me – both as audience and maker. It is a survival strategy, one that was taught to me first by my parents and grandma.

All art is storytelling, whether that story arrives in a paperback or as a pulse in the chest, whether it is a narrative story or a visual story of the colour blue.

You’ll be working with us on our newest publication, Indivisible – an anthology of work by writers with invisible disabilities. What excites you most about this project?

That the invisible is being made visible! When our conditions and symptoms are invisible to the unaccustomed eye, the barriers we face are also invisible. The arts world is built around a burnout model that relies heavily on adrenaline abuse, among other things, which is incredibly ableist (and classist and – oh don’t get me started). Writers with many kinds of disabilities are often immediately excluded not on the basis of skill or experience or talent but because we simply cannot plug the gaps in poorly designed schedules with our bodies.

In terms of the anthology, I don’t assume that any of the writers will address disability explicitly in their work, but I am very interested to see how that unique set of experiences might inform their aesthetic or approach, the flavours of what they create. It feels like the right time for this work to step out.

You’re currently working on TransBareAll’s 10th Anniversary book. What have you enjoyed about the process thus far?

TBA was founded ten years ago as a practical antidote to the shame that the mainstream world wants to see in us: we create events for trans and non-binary people to support health and wellbeing, and enable us to spend time together in environments that are affirming and positive. We regularly include creative workshops in our events, so I’m very conscious of the wellspring of talent and experience in our community. As co-editor I will be working closely with contributing artists and writers as they develop their submissions – there is so much that is possible, and I’m thrilled to imagine what we can make together!

I’m conscious of having just passed the 86th anniversary of the Nazi book burnings that specifically targeted the Institute of Sex Research, a library of progressive documentation and research on trans and queer lives. The effects of those book burnings are felt today; lots of people seem to feel that trans is a brand new thing that didn’t exist until about 20 years ago – that’s what happens when the visible evidence of a people’s existence is wiped out. Violent invisibility. We are living in increasingly hostile and intolerant times in which trans people – along with immigrants, refugees and disabled people – are being systematically demonised and targeted, so to be making a book, of all things, right now, feels not just celebratory but necessary.

You’ve been a writer at Commonword for many years and appeared in a selection of our anthologies. What is your best memory of your time with us and what have you learnt about yourself as a writer?

There are many, but one of the dearest has to be appearing onstage at the launch of my Crocus chapbook with support from the great, late Dike Omeje. What an honour that was.

I’ve learned that I’m the kind of writer who needs community, specifically the community of other curious artists. A room of one’s own is definitely excellent, don’t get me wrong, but only if it can be balanced with community.

Earlier this year, you were a speaker at Mathrubhumi International Festival Of Letters 2019. What did you find most enjoyable about your time there? What do you feel your insights contributed to the discussions?

There were incredible writers and artists and storytellers and documentary filmmakers from all over the world, so I fully pushed myself into a massive health crash just so I could listen and take part and absorb as much as possible. There was a lot that I loved, but two things that jump out are that it was entirely plastic-free – UK festivals, step up your game – and that there was a series of relaxed conversation events threaded through the whole weekend that involved speakers talking about why they read. The idea was that we all read for different reasons, and that understanding these reasons can help us all read better.  It was amazing to be in such a book-loving environment where reading is cherished and respected. Kerala as a state has 100% literacy and let me tell you the on-site bookshop was doing a HOT trade!

I delivered a performance lecture about disability aesthetics in fiction and poetry. It was the only event out of hundreds that was explicitly referencing disability, so I think it was a welcome addition – certainly something that the festival director, Sabin Iqbal, was really keen on including as he said it’s something that often gets overlooked in Indian festivals (so not too different to the UK in that respect). It was a winding tale of workarounds in form, tracing my own exploration as I create stories in whichever ways my body will let me. I think of myself primarily as a writer, but there are times when – due to my condition – I lose language, or sight, or cognition. It’s frustrating as hell, and leads to the increased illness I mentioned above, so I’m now exploring ways of navigating that creatively. This has led to the visual image, digital mark-making, and, funnily enough, back to spoken word. I’m increasingly finding it hard to separate one art form from another in my practice, so I’m letting them play together more.

You’ve been volunteering on our archives project for the past year. What prompted you to get involved? What do you hope people get out of the archive?

I hope that people get solace and inspiration and fire in the belly from seeing that radical and political publishing is not only the realm of flash-in-the-pan zines. That it has history, and memory. Commonword has been creating from the heart with a strength and longevity that has finally brought it all the way to the fine whisky anniversary of 40! I wanted to get involved because Commonword was my first creative port of call when I arrived in Manchester almost 20 years ago, and it has remained a central touchstone in my development as a writer. Across the city and far beyond it has nurtured such an incredible array of work from many of my literary heroes. The archive is not only a history, but also a resource, and I know Heena will be developing it into something that can inspire Manchester artists and writers for years to come.

Well, as I mentioned above, I am finding it harder to separate the art forms and so my next collection of short fiction will be published in some hybrid form. I’m working with an astonishingly good team of collaborators to figure out what that might look like, so nothing is nailed down yet – but there is, on a post-it note in my office, something about an arcade machine that dispenses stories and only accepts shingle. Hmm, possible future of publishing?