The 8th Black and Asian Writers Conference and Festival will take place on the 8th of October 2016.

Cultureword’s National Black and Asian Writers Conference has been running for 30 years. This conference, the 8th one of it’s kind, will take place on Saturday,  8th October. This year’s Conference includes panels, stalls, performances, interviews, conversations, ruminating, crystal-ball gazing, and an evening festival including a stellar performance from Manchester’s very own Lemn Sissay.
The panels will discuss Afrofuturism, flash fiction, digital and immersive poetry, new directions in theatre and many more, all in a dispersed festival fashion.

To read more about the panelists go to : https://www.cultureword.org.uk/panelist-bios 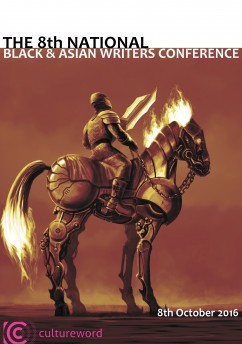 To read more about the panelists go to : https://www.cultureword.org.uk/panelist-bios

Is Digital Transforming writing? If so, how.

The digital age is upon us and publishing is changing fast. There’s a larger focus on digital outputs for creative writing. Has this impacted writing, and if so, to what extent? E-readers and phones are being used increasingly to access writing, does this affect the writing process, the writing itself and create new readers?
Taimour Fazlani is a writer and designer with interests ranging from metaphysics to economic systems
Bethany Hermitt is a visual artist currently living and working in Manchester
Adam Lowe (AKA Beyonce Holes) is a writer, performer and publisher from Manchester via Leeds
Samira Sawlani is a writer/journalist with focus in politics & development of East & Horn of Africa

Are the concepts of villain and hero to the detriment of Black Crime Fiction?

Many white writers in their development of Black characters have used stereotypes and racists tropes. Black writers are in a double bind, on the one hand, they want to interrogate how society is so structured that black people are over represented in the criminal system, while simultaneously they are loathe to replicate white crime writers’ racist stereotypes. An overcompensation of this is to create black characters that are seamlessly heroic. What is way forward for the black crime fiction genre?
Yvonne Battle-Felton is a writer, researcher and a lover of words based at Lancaster University
Peter Kalu is an award-winning playwright, poet and novelist
Anjum Malik has written several radio plays as well as for Woman’s Hour drama, The Interpreter.
Dr Jennifer Makumbi is an award winning Ugandan novelist and short story writer
Courttia Newland is an author, screenwriter, playwright and literary activist

The young writers of today i.e. Gen. Y/Z have the worst publicity surrounding them. However they are said by researchers to be multi-taskers, liberal and have a strong sense of community. This panel will discusses how Gen. Y’s writing is not only different from Gen. X’s, but is also changing the landscape of writing as we know it. Where Gen. X (born 1960’s – 1980’s) could focus on the written printed form, Gen. Y (born 1980’s – 2000’s) are writing through an ever-changing industry.
Shruti Chauhan is a poet and performer based in Leicester
Sanjay Lago is a writer and performer based in Scotland
Haamid Sharif is a 19 year old poet and an American Studies and History student
Keisha Thompson is a Manchester based writer, performance artist and producer.

Is the future of BAME theatre outside a theatre building?

Recent reports show that neither commercial nor subsidised theatres are diverse or inclusive to the extent they should be. Theatre companies such Eclipse, Talawa and Tamasha are working to change that. But is the nature of theatre in the UK such that it excludes anyone who isn’t white and male? Is the solution to take our theatre outside conventional theatre buildings, or is it to take over those buildings?
Javaad Alipoor is a mixed race writer, director, spoken word artist and theatre maker from Bradford
Yolanda Mercy is an Actor, Playwright and Experienced Youth Theatre Director
Benji Reid is an award-winning visual theatre director
Dawn Walton began her directing career at the Royal Court Theatre and is artistic director of Eclipse

What makes for a good translation?

With Britain being so full of voices from other languages why is only 4% of literature published in the UK translated? This panel will explore the challenges faced by writers, translators, and publishers in the industry such as: does the lack of translated works stop writers from writing in other (non-European) languages; are there enough literary translators of colour; does the lack of opportunities contribute to the lack of translators of colour.
Christina Fonthes is a Manchester-based poet, performer and translator
Pasha Abdollahi is an editor, author and worked as a journalist for the Tehran Times
Dr Louisa Uchum Egbunike is a lecturer in English at MMU with interest in postcolonial nationhood
Erica Jarnes works for the writers organisation English PEN

Black and Dangerous: BAME representation of mental health in writing.

Stigmas attached to mental health stop it from being properly discussed within literary contexts. Racism within mainstream mental health services means that there is a lack of understanding and services provided to BAME people. How does writing effect this? Does mainstream literature perpetuate the stereotype and lead to dangerous consequences such as the medicated and sedated black woman?
Dr Col Bashir is a psychologist, poet and playwright.
JJ Bola is a Kinshasa born, London raised writer, poet, educator and workshop facilitator
Charlotte Maxwell is a poet and short story writer from Manchester
Radikal Queen is a cultural activist and poet based in the UK, who makes grassroots theatre and music
Desiree Reynolds started as a journalist and has since written film scripts, poetry and short stories

From Ancient African civilisation to Afrofuturism: Illustration & the black aesthetic.

Does the stereotyping and simplification of non-western characters within mainstream English language literature continue? If so, how do we move away from each stereotype? Can literature play a role in resistance? With literature holding the power and potential to influence and critique, this panel discusses the belief that literature is not only important, but also should be responsible.
Hafsah Aneela Bashir is a poet who has just completed an MA in Postcolonial Literary & Culture
Kavita Bhanot worked as an editor for India’s first literary agency
Peter Kalu is an award-winning playwright, poet and novelist
Tariq Mehmood is a broadcaster, writer and filmmaker

The revolution in BAME poetry is yet to come?

In 2005, the Free Verse reported that less than 1% of poetry published by major presses in the UK was by Black and Asian poets. That 1% has since moved to 8% (in 2014). What caused this positive shift and what type of poets are the 7% who have grown from the 1%. 8% is still doesn’t represent the UK population which is currently 14%. Why is this? Who are the gatekeepers, what power do they wield and what is the effect of that execution of power on BAME poets and poetry.
Siana Bangura is a writer, blogger, freelance journalist, poet, performer, and public speaker
Nii Ayikwei Parkes is a writer, editor and socio-cultural commentator
Dr Sandeep Parmar is a poet, critic, editor and Senior Lecturer in English at the University of Liverpool
Yomi Sode is a writer/poet and was once long-listed as one of MTV’s Brand New Artist